History is taught at all levels in the school. The timetable provides for three single periods per week in each year of the Junior Cycle, which is compulsory at this level. History is optional at Leaving Certificate level. An allocation of five periods per week is provided for Senior Cycle students. This was structured as one single period and two double periods. Classes at both levels are mixed ability. There were seven teachers timetabled to teach History during the past academic year. Each teacher has developed their own historical atmosphere in their classrooms through the display of subject-specific wall charts, maps and student projects in written, pictorial or model form. Resources available to the students include DVDs, videos, books and posters, all of which provide a stimulus-rich environment

There were four official Department meetings held during the year to discuss planning and resources. Discussions at these meetings included feedback from teachers on summer exams, teacher collaboration, teaching and learning strategies and what books were required for the forthcoming school year. A discussion was also held around which classes had been allocated to each teacher. Open Night and the Young Historian Project were also on the agenda. Junior and Leaving Certificate exam results were discussed with the principal Mr. Rogers and it was agreed that we were happy with the standard of results at both levels. This is something as a department we aim to sustain. The number of students doing higher level in this year’s State Exams was also reviewed. Department members are undergoing continual training for the rollout of new Junior Cycle History. Meetings continue on an on-going basis both on a formal and informal level between department members at other times throughout the year.

All Junior Cycle students completed the relevant Junior Certificate course material for their year as prescribed by the syllabus. Students of first year studied material from Ancient Ireland, the Romans, the Middle Ages and the Renaissance. Second year students studied the Age of Exploration, the Reformation, the Plantations, the Age of Revolutions and the Industrial Revolution/Irish Famine. Third year students studied Modern Ireland, International Relations in the 20th Century and Social Change in 20th Century Ireland. 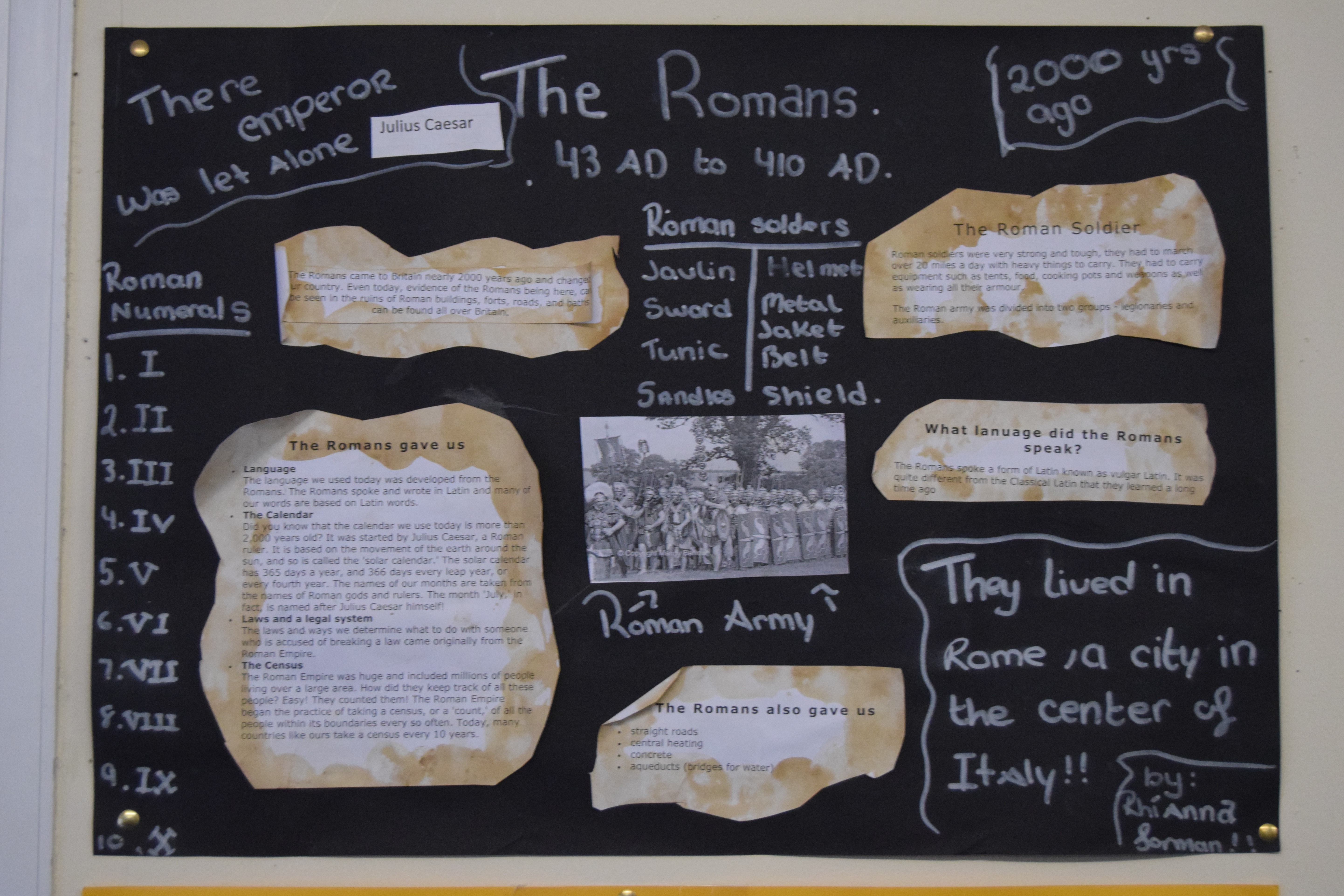 All Senior Cycle students completed the relevant Leaving Certificate course material as prescribed by the Syllabus. Fifth Year students studied the Irish section of the course: The Pursuit of Sovereignty and the Impact of Partition 1912-1949 and Northern Ireland 1949-1993. Sixth year students studied Dictatorship and Democracy 1920-1945, and United States and the World 1945-1989. Fifth years also carried out preliminary work on their Research Study, submitting their first draft as part of their summer assessment. Sixth Year students completed their Research Study and submitted it as requested to the school authorities on Thursday 23rd April, along with completing their revision of the 5th year course. 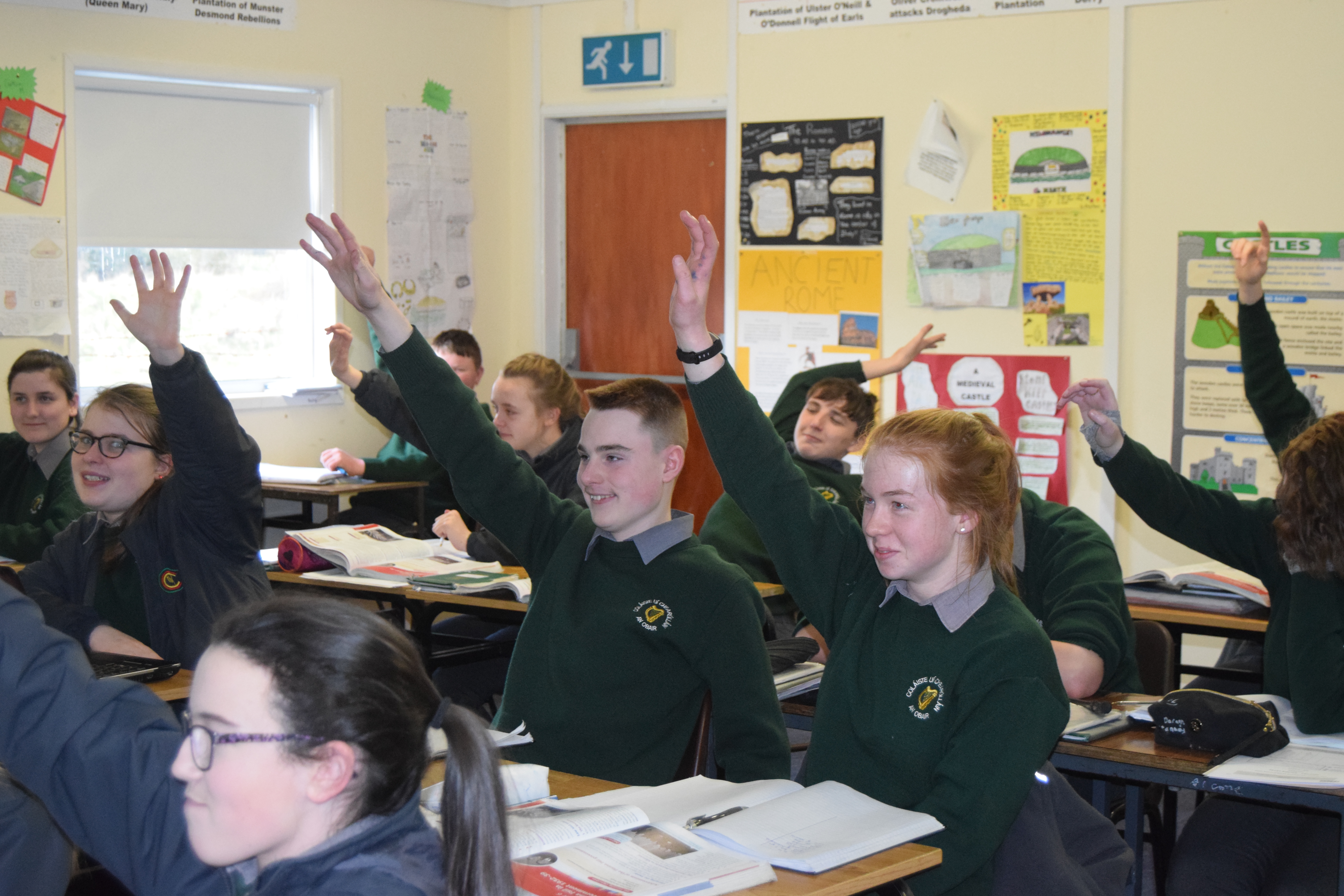 Students of Transition Year undertook a course in Heritage Studies which placed a focus on the impact of international politics on our lives locally, nationally and on the international stage. Students undertook mock elections in line with our National Elections in 2020. Students also took part in a mock UN debate which critiqued UN involvement during the Rwandan Civil War.

In September, our Sixth Year History Students joined our Sixth Year Politics and Society class to Derry. Here, students took part in a walking tour of Derry City, visited the Apprentice Boys Hall learning about their culture and organisations. Students got to hear raw stories from guides who lived during some of the most turbulent times in Irish history.

Teachers followed a policy of continuous assessment (monthly or bi-monthly) and common exams were set at Christmas and Summer. Students at exam level completed exams on a weekly/topic basis. Both Third and Sixth Year students sat a mock History exam in February. This year our Second Years completed their first CBA for the new JCT History course and produced some exceptional pieces of work. Written and oral homework was set for students by teachers with due regard paid to the school’s homework policy. Students of first and second year completed various projects throughout the year which counted toward their final grade. Various media employed included model making, wall charts and biographical accounts.

TY also completed a Tour Guiding module through Glasnevin Cemetery in Dublin. Here they improved their oral and presentation skills and two students were invited back to take part in the National competition in April. Students also participated in a local archaeological dig in Kilberry, in conjunction with the Geography Dept. They worked closely with archaeologists and furthered their love for the subject.

We use cookies on our website. Some of them are essential for the operation of the site, while others help us to improve this site and the user experience (tracking cookies). You can decide for yourself whether you want to allow cookies or not. Please note that if you reject them, you may not be able to use all the functionalities of the site.